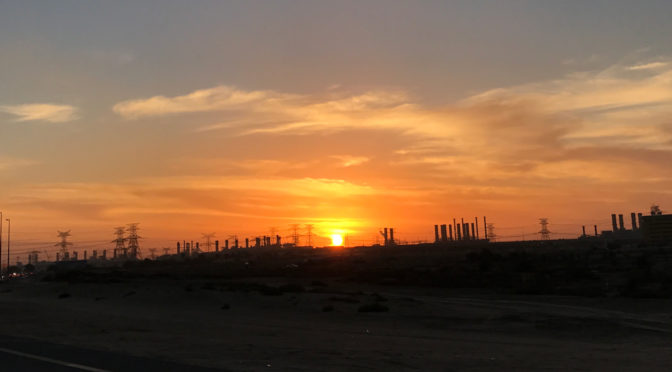 Dubai. The entire city is a man-made miracle. Its a fine example of what great vision, honest leadership and innovative business models can build. Its beautiful, clean and safe as any city can possibly be. And we’re sad to leave!

We had our own challenges moving in and out. But the journey in between was full of memories. I can’t express what it means to arrive in a new country and find an old friend END_OF_DOCUMENT_TOKEN_TO_BE_REPLACED 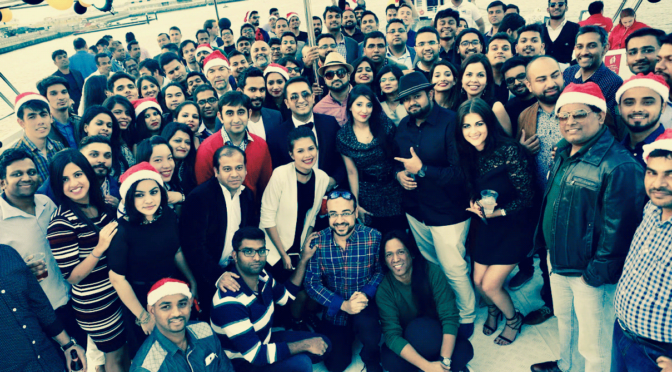 “We have to continually be jumping off cliffs and developing our wings on the way down.” ― Kurt Vonnegut

After two phenomenal years of launching apps at the Landmark Group’s Web Team, I’ve decided to move on. But before that, I wanted to thank the incredible people and fabulous products that made this journey truly remarkable.

Firstly, a big thanks to Arjit, Ziyaad, Daniel and Savitar for sensing potential in my B2B Product skills and entrusting me to lead consumer products. Also Derrick, for offering a wide range of responsibilities ranging from E-commerce to Loyalty strategy, END_OF_DOCUMENT_TOKEN_TO_BE_REPLACED 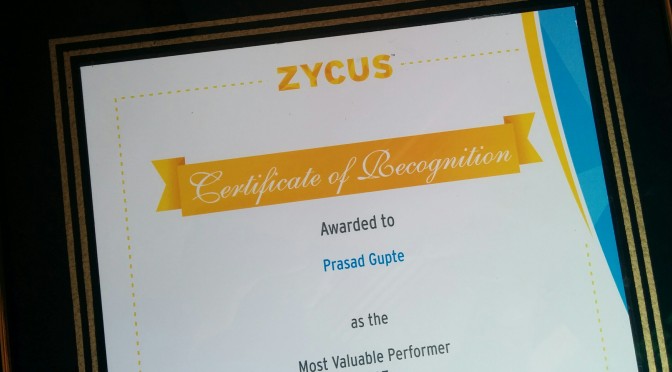 Super excited to announce that I was awarded MVP at Zycat – Zycus’ annual awards function. Here is the video snip:

Prasad Gupte (Senior Product Manager) was awarded MVP at Zycus’ annual awards function – Zycat 2014 – and here’s is what they had to say: “Prasad has been rated highly as an Excellent Mentor, Great Communicator and a person with amazing convincing skills by peers.

Prasad has been rated highly as an Excellent Mentor, Great Communicator and a person with amazing convincing skills by peers.

“With him in place, half the battle is won” – that’s what the Sales team thinks about him. (He) has been instrumental in creating positive influence for Zycus Products in non-US markets, especially for P2P. He was a key contributor in our first S2P deal.

END_OF_DOCUMENT_TOKEN_TO_BE_REPLACED

I hope I’m writing a new post just in time – before someone inquires my whereabouts. #exaggeration. No one cares where I am or what I’m doing; whether I’m writing or I’m not. But that’s not too bad either.

But honestly, who am I writing for? I don’t write to seek fan following or money, so numbers don’t bother me. Few read my thoughts, most of them come here to demystify jargon or sync their Thunderbird address book with LDAP or check ferry timings. But numbers are not completely discouraging: in less than 2 years (starting Jun ’09) we’ve got over 28000 hits,  close to 50 unique visitors visit us each day. And that’s not too bad either.

7 months back, I went through the toughest times and life couldn’t have taught me more. I was paranoid for inspiration & motivation. I picked up Amit Gupte’s practice of wishing luck to friends and realized life is short, and my friend list is too long. It would take me over 3 yrs to wish each one of them, and more pain END_OF_DOCUMENT_TOKEN_TO_BE_REPLACED

Apologies! I know that I have been away for quite some time now – but there are reasons! Work being the major sucker 🙂 followed by personal interests. Moreover, my boss paid a visit 😀 I tried hard to spare time, then reversed some – but nothing worked! Anyway, the good news is that I’m back.

I did miss writing all this time & kept noting them as they happened. To begin with, I hope you are aware about Census 2011. Most state & central government employees have to compulsorily participate in this, over & above their routine responsibilities (pl note 0+1=1). The lady who was doing it in our area was an innovator! Instead of visiting each house & collecting data, she took an iterative, outsourcing model. She took the lift to the first floor, and walked down distributing a form in Marathi to each house. She very calmly told people that the form was very simple (I don’t know of a single govt form that is simple) & that one didn’t need to know Marathi to fill it (I don’t know how Bengalis & Malayalis bought this idea?) Suddenly people realized the importance of Maharashtrian neighbours, and fortunately each floor had one. After putting people to the job, she again took the elevator up to start collecting filled forms. I’m sure with this trick she managed to get home in time for lunch, which otherwise she would’ve had to couple with dinner. Just to note, that innovation is not necessarily rocket science.

Two notable things happened in the near past, both of which have affected our lives in one way or the other. The first thing: revised auto-fares. As Shubhojit said, this is one thing that makes you feel real poor. What I used to spend both way is what the 3-Tyre boogie now takes away one way. All thanks to the revision graced by skilled instrumentation engineers at garages.

The other thing – the symbol that our national currency got – actually makes me feel very proud. It is the symbol of globalization, equality & finally a distinguishing factor from other currencies with the same name. Some websites, like Burrp, picked up the symbol in no time. I’m just waiting for it to show up on currency.

After news about the symbol hit the stands, people questioned the kind of money that must have gone into its making. But I say, what’s wrong? If someone can spend tons of money raising statues in a city where people don’t have enough, END_OF_DOCUMENT_TOKEN_TO_BE_REPLACED

Today is a day in my life when I have taken a very tough call: something that is likely to shape my future. I have resigned from my post at L&T Infotech and decided to move on. L&T has been my first employer, and as always, the first cut is the deepest. The couple of things that can make you feel better in such parting is that ‘nature aborts vacuum’ and that ‘the organization is always bigger than the employee’. END_OF_DOCUMENT_TOKEN_TO_BE_REPLACED