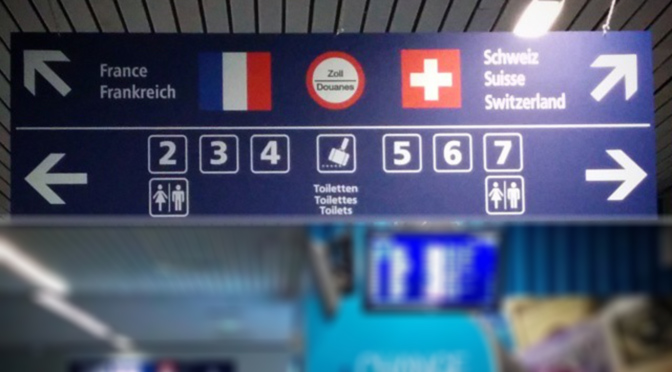 The 3 countries meet at a point on the river Rhine, and the intersection is celebrated by the Rhinecenter mall on its banks. In fact, we walked in 3 countries in a matter of an hour, although it wasn’t good enough to mark them ‘done’. Switzerland also shares its borders with Austria on the east, and Italy on the south. Swiss cars bear the Swiss flag on their number plates

, while their European friends boast the EU flag with the country code. Its amazing how they’ve managed to create a Europe-wide unique namespace.

Switzerland is only part of the Schengen treaty, and not part of the EU mainly to keep their economy strong, stay neutral & retain privacy of their folks. It is also believed to be a true democracy. Although the ministers are elected, they are completely powerless. It is as though they have an approval threshold. Everything beyond a certain value, importance & impact needs to be decided by the people through voting. And people care because they’re made to feel important by the government.

At the time, the Swiss defense ministry was contemplating modernization of their fighter fleet, and sadly people voted against. I think with so few people, complete literacy & national systems in place, you can manage that. Swiss citizens are also very secure; in the event of a nuclear disaster, every citizen can be accommodated in a secure bunker. We were lucky to walk into one such basement with thick walls, metal door & an air purification system.

I yearn to see such peaceful borders in Asia & Africa.