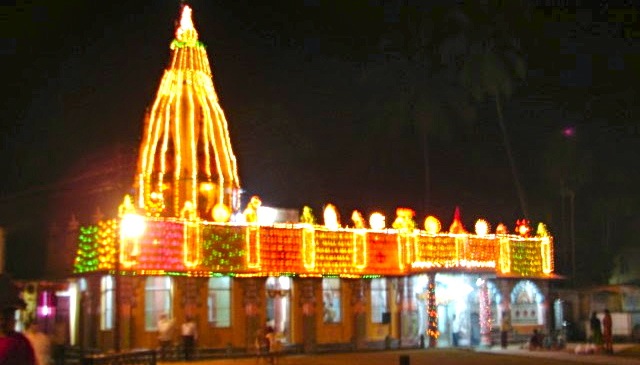 I only have one planned vacation each year – a trip to my native place Murud-Janjira. It is a coastal town in the Raigad district of Maharashtra, about 160km from Mumbai. My grandfather left Murud to attend law school in Mumbai. 3 generations later, there is still one thing that keeps the extended family together and coming back to our native place – our temple.

A couple of centuries back, one Mr.Joshi had a dream about an idol of Lord Ganesha under a tree. They dug it up and indeed found a stone resembling in shape with a Ganesha idol. It was then handed over to our family to be worshiped. What must’ve started as a small shade in Nandgaon (10 kms short of Murud), is today a popular destination for devotees & tourists alike.

The Ganesh Chathurthi festival in the month of Bhaadrapada was  popularized by Lokmanya Tilak as a social event. But Ganesh Jayanti, Ganesha’s birthday if you will, is actually celebrated in the lunar month of Maagh END_OF_DOCUMENT_TOKEN_TO_BE_REPLACED

I couldn’t have found a better day & subject to resume blogging than recall memories on the birthday of my beloved grandpa – Late Shri Madhukar Bhaskar Gupte – who very unfortunately passed away on January 22 this year. His loss wasn’t limited to his progeny, but people far and wide in his friend & family circle who had fond memories of him.

Born 29th March, 1931 at Murud-Janjira, he was the 3rd child of the late Shri Bhaskar Govind Gupte. Bhaskar bhai as he was known to most people in Murud was a very successful lawyer of his time, with stories of his arguments in court cases, as well as during prohibition still recited in the family. Of the siblings who survived adulthood (several passed away before teenage), Aajoba was #3 after his elder sister Sulochana (later Mrs. Chaubal), elder brother late Shri. Vinayak Gupte (a.k.a. Bal or Vinu who passed early 90s), and followed by two younger brothers: Shri Sudhakar (a.k.a. Appa or Sudha) & Shri Srinivas (a.k.a Baba). Only Bal ajooba had passed away before his death.

Aajoba attended Sir S A High School in Murud, and moved to Mumbai after matriculation to study law at Ruia College, Matunga. At the time, he lived with his elder sister’s family and shared a very strong bond with her children Mohan & Pratibha, who fondly called him Nana mama. We’ve heard stories of  Aajoba carrying Mohan kaka END_OF_DOCUMENT_TOKEN_TO_BE_REPLACED

We were munching snacks at one of the venues when my mother pointed to a lady she thought she knew. It was a short, fair lady with curly hair; none that we had seen before. My mom insisted that she was almost sure, and ignoring our plea to rethink, went on to ask her. My brother escorted her as if she would’ve been executed for a wrong guess. As I watched from a distance, ma asked her a few questions that confirmed her suspicion, but it was little help for the lady. The moment she heard ma’s maiden name, she was struck awestruck! END_OF_DOCUMENT_TOKEN_TO_BE_REPLACED

This is my favorite video, taken at Sella Pass (15000 ft) on our way to Tawang. We got this close to ice for the first time and in our excitement jumped into the ice. Features my bro Pratik a.k.a. Chibu who quite bravely jumped & sunk into the ice; and inconsiderately left his shoes behind while being pulled through. END_OF_DOCUMENT_TOKEN_TO_BE_REPLACED